The Bay of Kotor, or Boka Kotorska, as locals call it, is one the most beautiful places in Montenegro. If your time is limited and you decide that you can visit only one or two places in Montenegro, come here. Most of the Bay is included in the UNESCO’s list of world heritage sites. The bay itself is one of the 30 most beautiful bays in the world. On the shore, you will find many old towns, plenty of cafes, restaurants with impressive views and lots of things to discover. 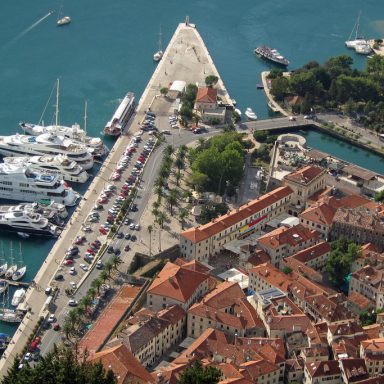 It is best to start a tour of the Bay of Kotor from its ‘capital’, Kotor. It is the most significant city at this part of the coast. The Old City was mostly built by the Venetians. Here you will find winding alleys, small squares and two kinds of Christian churches: Catholic and Orthodox. The city is frequented by bus tours from around the Europe, sightseeing tours continue all year round. At the shore, you can often see cruise liners.

Right at the entrance to the Old City, almost at the gates, there is a gift shop with good travel guides around the Old City. Spare a few euros and get one. It will help you to take a walk around the city in an hour or so. If you decide to have a bite to eat, the best option I know is the Astoria restaurant in the Old City. 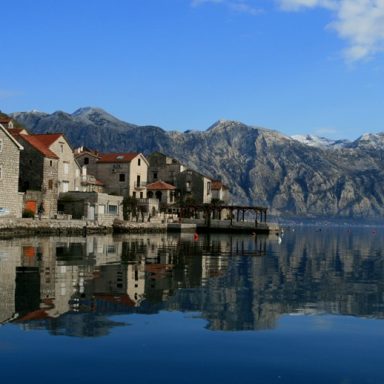 The next stop of your route is Perast. Any travel guide will give you information on its history. It is the ancient centre of Adriatic sea-faring. Here, 17 young high-level Russian noble people called boyars took classes in seamanship under the order of Peter the Great. The first Russian admiral who distinguished himself in the Swedish war during Peter’s reign, was born here. Here, the French built the first naval academy at the bay.

Today, there are about 400 residents, and the only road is also the quay. In summer, it is closed to cars. All cars are parked at the city entrance, so you can take a walk or rent bikes or Segways. There are two fine seafood restaurants, but Perast is considered a somewhat bohemian resort, so the prices can be rather high.

In summer, you can take a boat ride at the quay to visit the nearby islands: Gospa od Škrpjela – Our Lady of the Rocks and Sveti Đorđe — St. George. These are two tiny islands within 250m from the shore. The first one was literally built by locals in the XV century. There is an old church and a sea museum. The second one hosts a Catholic abbey and a graveyard. 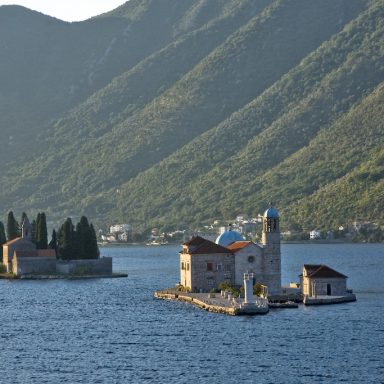 Gospa od Škrpjela is very popular among tourists, but Sveti Đorđe is entirely off limits. At Gospa, in the church you can see the icon of Our Lady, patron not only to sailors of the Adriatic, but the entire Mediterranean. Any professional sailor has made it his duty to visit Gospa at least once. Even today, all ships, including cruise liners, honor the sanctuary with two blows of their horn. No tour of the bay will be complete without a visit here.

Each year on the 22nd of July, Perast hosts the feast of Fascinada.

Several dozen yachts from Montenegro, Croatia, Greece, Italy and even Russia depart from Perast in the morning on this day. They reach the bay entrance, circle the isle of Mamula and return to Perast. The finish line of the regatta lies between the two islands mentioned above. In the evening, at sunset, local residents row on their decorated boats from Perast to Gospa od Škrpjela, singing celebratory songs, and throw 1-2 large stones to the bottom of the sea near the island.

Nearby Perast, there are two well-known seafood restaurants, located in the wild: Stari Mlini and Ćatovića Mlini. Both are very picturesque, atmospheric and expensive. But if you decide to spend an evening in style, that is the place to be. Though the Stari Mlini is older and more comfortable, Ćatovića Mlini offers better service and cuisine. Both restaurants are marked on the map.

The next point of the route is Herceg Novi. This resort is also divided in two: The old city and the modern part. The old city is too small and not as attractive as Kotor’s or Budva. Most points of interest are found in the vicinity.

First, there’s the Španjola fortress above the city. It was built right across the bay entrance in the XVI century by the Spanish, who briefly captured the town. The road is hard to find, because it is rather narrow. If you reach it, your reward will be a beautiful view of the town and the bay.

You can take a boat ride from the quay: Rose, Žanjic beach, the Blue cave (Plava Špilja) and the island of Mamula are rather worthy destinations. A one-way ticket will cost you no more than €5. The Žanjic beach is quite good. It’s covered in pebbles and dressed in concrete; there are restaurants, a parking, bathrooms, and dressing rooms. Also, it’s really crowded during the peak season. The Blue cave is a grotto in a shoreline rock on its sea side. The water there is about 5m deep. Boats enter the grotto, so the tourists can dive right off from the side. 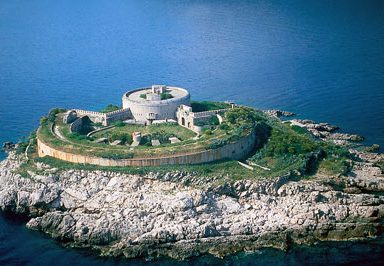 The name of the cave is derived from the water colour. The sand floor and reflection of the sun rays make it really bright and blue. The island of Mamula is the Montenegrin Fort Boyard. It is a circular Austrian fortress, built in the middle of XIX century. It is 200m in diameter and the walls are up to 5m thick. There are high quarters, a bakery, bathrooms, a sauna, a water reservoir that contains several thousand litres of water, winding staircases, firing ports etc. Nowadays it is almost forgotten. The only pier has been destroyed.

Croatians are very respectful towards their own national symbols, so the only currency accepted are kunas, the national currency of Croatia. Be prepared.

If crossing the border with Croatia is not a problem for you, you can visit the Prevlaka park at the Croatian side of the Bay of Kotor. In the 1990s, it was an arena of vicious fighting between Yugoslavia and Croatia. Now it is neutral territory under the Croatian governance. You can see the evidence of the First and the Second World Wars, as well as the Yugoslavian war. There are several footpaths through the peninsula, that lead to the cape itself. There is an Austrian fortress there that is the precursor to the Mamula fortress. If there are enough visitors, a small train travels around the park, and you can rent bikes throughout the rest of the year. The entrance fee is 15 kunas.

When leaving a car in the town, consider the parking regulations. Herzeg Novi has strict parking rules. There are special signs that govern parking. You can pay for the parking, by buying a special token at any newspaper stand and displaying it on your windscreen or sending a text message with your car number (in Latin alphabet, no spaces) to a short number displayed at the road sign. The latter is more convenient, because within 5 minutes before the allotted time ends, you will get a notice and will be able to renew the parking time. The entire town is divided into three pricing zones. The closer to the old city you are, the higher the price will be. It’s about €0.5-0.8 per hour.

When you have seen Herzeg Novi and the surrounding area you can begin your return trip. You need to take the same road from Herzeg Novi to a small settlement of Kamenari. There you can travel by the ferry line across the Bay of Kotor and continue via Tivat. Tivat is a small town which does not rival Kotor, Perast or Herzeg Novi, but there are a few sights to see. You better leave it this time however, and visit it on another journey. The journey around the Bay will be full of sights to see even without visiting it.

Rate our work
Thank you! Your vote has been counted
Rent a car
Excursions
Airport transfer
Useful articles
All articles
Herceg Novi in Montenegro