A number of places in Montenegro is worth visiting – Budva with its magnificent beaches, Bar offering great shopping, the Bay of Kotor where the mountains, the sea and the sky are the whole. But citizens themselves are proud of Herceg Novi in Montenegro most of all and call it “The Garden of Montenegro”. It really looks like a separate world full of green – Mediterranean plants once brought from afar by sailors have taken root and grown thanks to the unique microclimate of the place.

The history of Herceg Novi in Montenegro

Throughout its existence the resort changed names and owners who fought for a strategically located area. The city was founded in 1382 and then three hundred years it was ruled by the Turks. Later the settlement became the property of Spain and in the XVII century the Venetians turned it into part of their lands. In different times Herceg-Novi was controlled by Austria-Hungary, the Russian Empire and France. In the last century it was part of Yugoslavia, and now the city belongs to the European state of Montenegro.

Places of interest of Herceg Novi in Montenegro

It’s no wonder that every year the city attracts lots of tourists from all over the world. Herceg Novi in Montenegro is famous for its unique atmosphere and historical landmarks. This quiet and cosy resort is full of amazing sights among which “The Old City” is considered the most interesting. Ancient buildings and a “maze” of narrow streets remind of long-past events.

As the locals say, this area is the “heart and soul” of their beloved city. That’s why the authorities try to preserve this important object for future generations, so even destroyed by time buildings undergo a thorough reconstruction. Being separated from the residential buildings by a road “The Old City” offers tourists a great number of monuments, churches, temples, castles and fountains looking at which one gets a strong feeling that time has stopped.

Here are some of them.

Herceg Stjepan Square is a place where citizens like to walk. It looks very picturesque and sometimes is called Bellavista for the astonishing view of the sea Bay.

The majestic Orthodox Church of St. Michael the Archangel combines the features of Gothic and Romanesque architectural styles. Minarets built in the era of the Ottoman Empire add charm to this religious building. A unique iconostasis of Italian marble is the main value of this ancient temple and the beauty of the interior decoration is breathtaking.

A 16-metre high clock tower Sahat Kula constructed on the orders of the Turkish ruler in the seventeenth century is now an archive. It was built in order to help Muslims living in Herceg Novi in Montenegro know the prayer time in mosques. In 1995 the mechanical clock with heavy weights was replaced with an electronic one.

The ruins of the fortress Forte Mare in the old part of the Montenegrin resort attract the attention of all tourists. Being once a strong fortification founded by the Bosnian king it was modified and expanded by the new owners during the following centuries. More than 60 years ago the local authorities built a summer theater at the site of the Fort. Discos and performances of popular music groups are organized there.

The main attractions in Herceg Novi were built during the period of Turkish domination. Besides them the city offers a wonderful beach vacation, nice shopping and many other amusements – performances, excursions, boating and so on.

After visiting Herceg Novi you will bring home a lot of pictures, gifts and exotic things as well as unforgettable impressions and a strong wish to return one day.

Rate our work
Thank you! Your vote has been counted
Rent a car
Excursions
Airport transfer
Useful articles
All articles 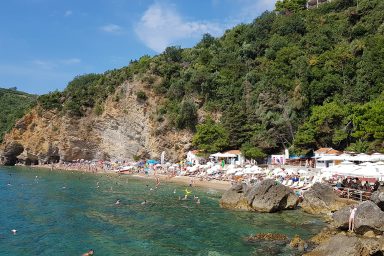